Over 90% of the drugs on the market possess at least one nitrogen atom in their structure and approximately one reaction out of six performed in the pharmaceutical industry involves the formation of a carbon-nitrogen bond. Most pharmaceuticals that cure diseases and improve our quality of life have emerged from intense medicinal chemistry efforts. Clinical candidates are selected from thousands of potential molecules, each of which has been designed, synthesized in an average of 8 steps, and thoroughly tested. Chemical innovation is at the core of this endeavor, and new technologies are rapidly adopted by industry in an effort to improve the efficiency of the drug discovery process. Our program is centered on the development of new reactions and catalysts for the synthesis of key structural subunits of demonstrated importance in medicinal chemistry and agrochemistry, thus providing quicker access to bioactive molecules and enabling the formation of new compounds.

Our program also uses inexpensive reagents and catalysts, leading to emerging applications in the synthesis of bulk chemicals. Building on momentum gained in the synthesis of nitrogen-containing molecules (1), our work now also features the use of aldehydes as catalysts operating via temporary intramolecularity (2) and the development of a new family of isocyanates for applications in medicinal chemistry and in the isocyanate industry (3).

Hydroamination is a very dynamic research field, with over 1500 publications over the past ~15 years (~150/yr since 2009). This intensity is linked to the synthetic potential of this transformation, which offers the prospect of transforming very inexpensive reagents (alkenes, alkynes and amines) into a variety of fine and bulk chemicals. The majority of recent work in this area focuses on the development of metal-based catalysts. Our metal-free approach uses hydroxylamines and hydrazines as bifunctional reagents that react via a concerted cycloaddition pathway.  This approach is unique and the processes we achieve can occur at similar temperatures to what is achieved with the most active metal catalysts, as detailed in the publication section. But we ensure that our work also provides access to useful nitrogen-containing molecules, including complex hydroxylamines and hydrazines, oximes and hydrazones, nitrones and azomethine imines, and various heterocycles: pyrrolidines, piperidines, morpholines, piperazines and tetrahydroisoquinolines, clearly demonstrating the broad applicability of metal-free hydroaminations for the synthesis of useful, or bioactive nitrogen-containing molecules.

Catalysis of difficult reactions is at the base of most chemical and biochemical reactivity, and is typically performed to accelerate transformations through activation of one or both reactants. But many catalysts (e.g. enzymes) also perform pre-association and pre-organization of reagents to achieve increased reactivity and control. Despite known potential to accelerate reactions by up to 108 by pre-association, catalysts accelerating reactions ONLY through pre-association are very rare. So rare that there are hundreds of examples of reactions that use temporary intramolecularity through a stepwise process: assembly of the tether, desired reaction, cleavage of the tether. Our efforts toward intermolecular alkene hydroaminations have resulted in a catalytic strategy, enabling directed intermolecular hydroaminations to proceed at room temperature. In this work, we reported that aldehydes accelerate otherwise impossible reactions ONLY through temporary intramolecularity, and reported what is to the best of our knowledge, the first example of a highly enantioselective aldehyde-catalyzed reaction! Development of other reactions using temporary intramolecularity / aldehyde catalysis is in progress…

Isocyanates are extremely important bulk chemicals; e.g. millions of tons are used annually in applications in the coatings, paint and polymer industries and the global market for isocyanate derived goods is worth well over $10 billion/year. These chemicals are also very important building blocks used to assemble pharmaceuticals and agrochemicals. We became interested in isocyanates thanks to serendipity, discovering the alkene amination reactivity of nitrogen-substituted isocyanates (“normal” isocyanates are carbon substituted). Surprisingly, there are only a few dozen papers related to N-substituted isocyanates in the literature (in contrast to >100,000 publications and patents for C-substituted isocyanates). Naturally, we became attracted by the reactivity of these amphoteric molecules, and have been using them in alkene aminocarbonylation reactions, and in substitution reactions to rapidly form molecules possessing the several N-N-CO motifs and displaying interesting biological activities. 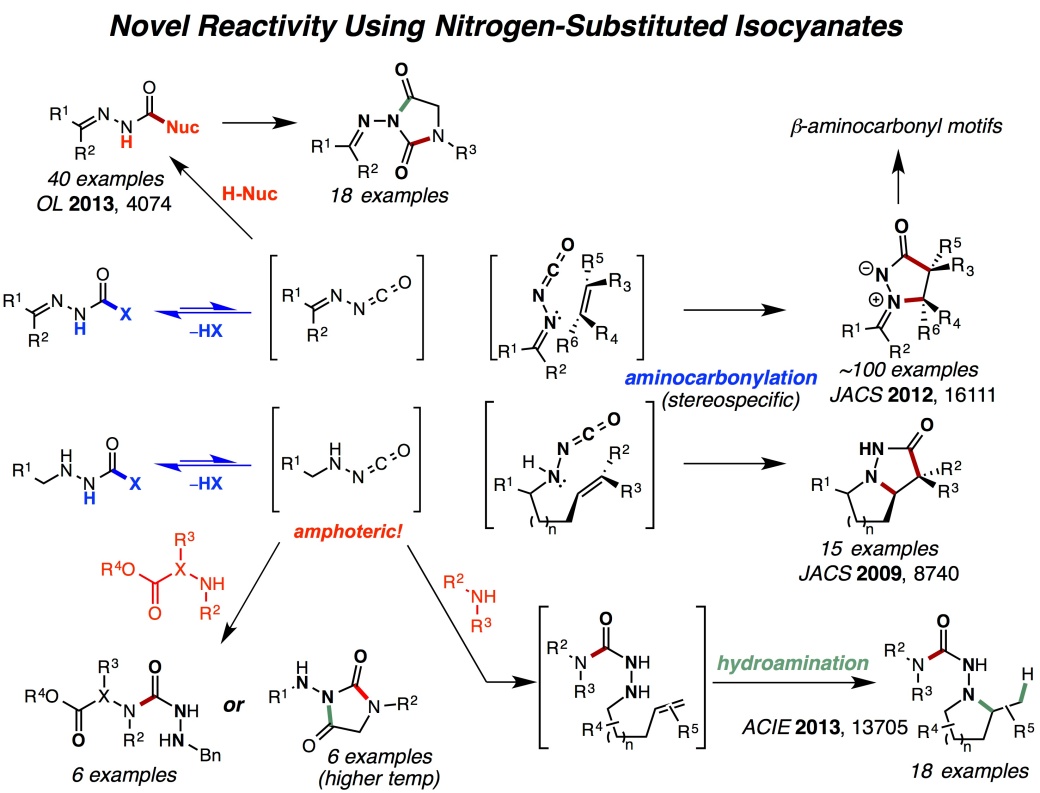 Our group is always interested in pursuing big-picture goals. We always have several projects that are at the exploration or incubation stage, and that we can pursue by collaborations if needed. Such projects are in the areas of organocatalysis, medicinal chemistry and in “origin of life” – prebiotic chemistry, and are typically discussed in person with prospective students!

International students / PDFs: Due to the high number of email applications, only candidates that can be considered for a position will be contacted by email.